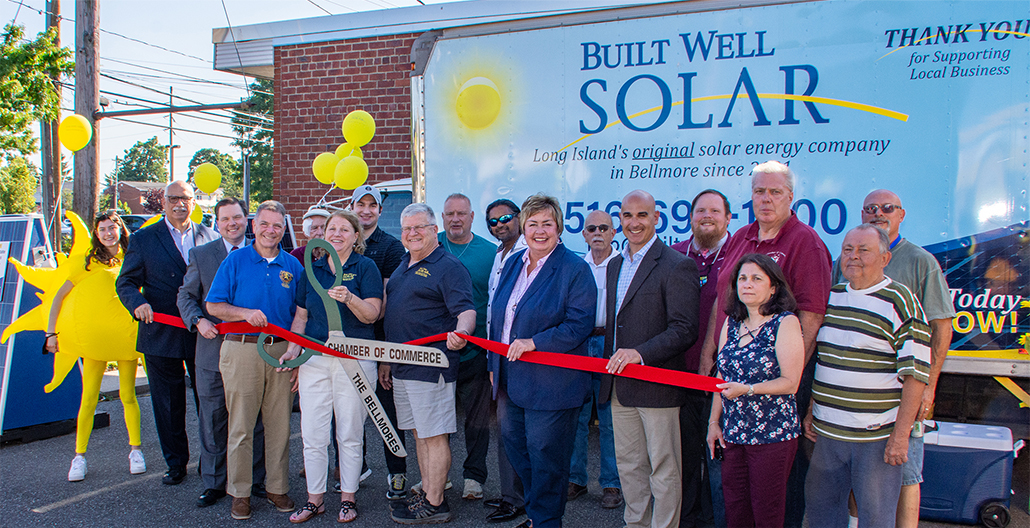 Built Well Solar started in 2001 when its founder, a 9/11 first responder concerned about our dependence on foreign oil, realized solar energy was the perfect energy-saving, cost-cutting solution for Long Islanders.

Long Island’s own pioneering solar energy company, Built Well Solar, celebrates its 20th anniversary this year.
The Chamber of Commerce of the Bellmores commemorated this milestone by sponsoring a special ribbon cutting at its office located at 2473 Jerusalem Avenue in North Bellmore (next door to the N. Bellmore Post Office) on Thursday, June 17th.

“It’s unbelievable how quickly these 20 years have flown by,” said Built Well Solar founder & president Dan Sabia. “Yet, it’s really just the beginning in so many ways as our company continues to expand in this industry that is still very much in its infancy.” Mr. Sabia went on to say that he’s proud that the company has helped thousands of Long Islanders switch to solar energy and cut their cost of living. “Many of our customers have paid for college tuitions, cars, boats, dream vacations, or expanded their businesses with the money they’ve saved by switching to solar energy,” he said. “It’s amazing!”

When Built Well Solar began, it was also the start of the Solar Pioneer incentive program offered through the Long Island Power Authority (LIPA, later taken over by PSEG-Long Island). “When I read about the Solar Pioneer program on my LIPA bill in 2001, I jumped at the chance to participate,” Mr. Sabia said.

“After serving as a first responder at 9/11, seeing that devastation, I realized we needed to do something to alleviate our dependence on foreign oil,” Mr. Sabia explained. A retired U.S. Army National Guard officer, with the rank of Major, Mr. Sabia was called to Ground Zero after the Twin Towers fell on 9/11 because of his expertise in nuclear/ biological and chemical weapons, and served as logistics officer/facilities engineer with the Army Corps of Engineers as commander of the 204th Engineers at Camp Smith in Peekskill, New York.

Although he had military logistic knowhow, as well as a college degree in construction/ architecture as well as expertise as a general contractor and as a school district facilities director, Mr. Sabia completed a certification in photovoltaic design and installation of solar technology. Then he installed the first photovoltaics system on his own home in North Bellmore. This turned out to be the very first 10-kilowatt residential PV system on Long Island. “That’s how I got into to the solar business,” Mr. Sabia said. “I started with my house, then a friend’s house, then a neighbor’s house and so on, more friends, more neighbors. Before I knew it, I was in business.”

“When Built Well Solar opened, there wasn’t a solar panel in sight. It was like the Wild West back then,” Mr. Sabia explained. “Only two of us were providing solar energy on Long Island, just the two companies, our company in Nassau county for the most part and Go Solar, which has since folded, in Suffolk county for the most part.”
In its first year, Built Well Solar had three employees, Sabia included, and installed just four residential PV systems. Today, with dozens on staff, the company has since designed and installed thousands of residential and commercial solar energy systems, more than most other Long Island solar companies combined.

“Our focus has always been on being straightforward with our customers,” Nancy HIler, VP, Marketing & Operations, said. “It’s about explaining how solar energy works, dispelling the many myths out there so that customers understand just how affordable solar is, how the payback is usually 4-5 years, and how generous federal and state tax credits come into play.”

What also distinguishes the company from others, she said, is that they do not engage in high-pressure sales, cold calls or door-knocking, and have always advocated PV purchases rather than leasing’s rent-your-roof scheme, since purchases are undeniably much more beneficial financially to consumers.

In addition to receiving many consumer-oriented accolades, including its Better Business Bureau A+ rating and having been voted “Best of Long Island” many times, Built Well Solar has attained ranking nationally as one of the “Top Solar Contractors in the United States” eight years in a row.

“We’re excited to celebrate 20 years of helping our fellow Long Island homeowners and business owners to cut or eliminate their electric bills,” Mr. Sabia said. “We look forward as we add new customers every week, continuing to make a difference to our neighbors, their wallets, our local economy, and the planet we all live on.”